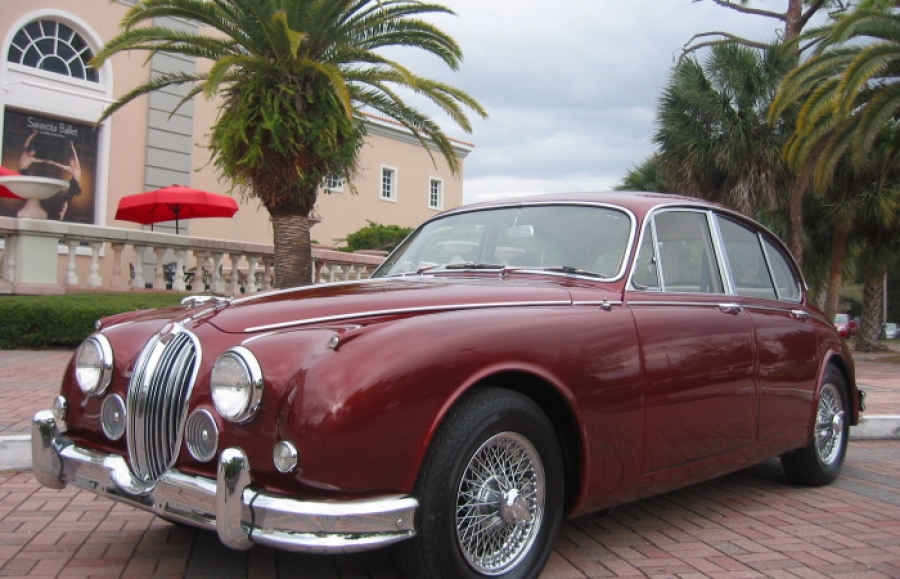 With a nod to a more classic era of English motoring, Tarraco Classic is proud to offer this superb 1960 Jaguar Mark 2 Saloon.

Finished in classic Marion, the car's paint is in top condition. The car's windows are intact and clear and otherwise in good shape. The car's lights are in very good shape, crack- and haze-free and its bumpers and chrome parts are in top shape. the body panels are all straight.

The 3.8L engine was released in 1958. It retained the 3.4L's bore centers and a 4.2-inch stroke but was bored out to 3.4-inches for a total displacement of 3,781cc. The 3.8L had a number of detail differences from the 3.4L, particularly in its valve gear and carburetor. Please note it is not the original matching engine.

Inside, the original, beige Connolly Leather seats have been refreshed, look excellent and present a cool contrast to the exterior maroon. The Wilton wool carpet is in good shape, a new headliner was installed and the original burled walnut dashboard and matching tray behind driver has been restored. The radio is inoperable but the interior and instrument panel lights work as designed. The Wilton interior trunk wool is in fine shape

The Jaguar Mark II was introduced in October 1959 and continued in production until 1967. The MKII was built as a replacement for the 2.4 and 3.4 liter saloon, also known as the MKI.
The MK II was based on the MKI, but the result was different in many ways, both aesthetically and mechanically. Improvements to the design and modern materials resulted in a reduced overall weight. The interior was completely redesigned but retained its luxury and elegance with such amenities as leather and wood veneer. The attention to detail both inside and out, only amplified the ambiance of sophistication. Leather seats continued to be standard until 1967 when Jaguar offered it as optional in an effort to reduce the cost of the vehicle.

Under the hood was an XK engine, the same that had won at LeMans in 1951 and 1953. The XK engine was now enlarged to 3.8 liters producing around 220 horsepower. The engine continued to prove itself as a reliable and capable power plant.

The replacement for the first small unibody sedan, the 1955 Mark 1, the Mark II was an extremely elegant sedan that has been considered the most eye-catching, most compact Jaguar sedan ever. The Mark II featured a larger greenhouse, larger side and rear windows, an updated grille, fitted fog lamps, a wider rear track without the full fender skirts, and standard four-wheel disc brakes. Jaguar postwar saloons have always been denoted by Roman Numerals until the introduction of the XJ. The Mark 2 used Arabic Numerals denoted on the rear of the vehicle as 'MK 2'.

The interior of the Mark II was truly a masterpiece with its beautiful walnut veneer dash, plush leather seats, and multiple gauges now placed in easy distance from the driver along with a row of toggle switches. The cabin space was updated with 18% more cabin glass area, which majorly improved the visibility. The Mark II had a wide windscreen thanks to new slender front pillars. The rear windows nearly wrapped around to the enlarged side windows now with the familiar Jaguar D-shape above the rear door and completely chromed frames for all of the side windows. The larger side, tail and fog lamps found a new home as a the radiator grille was updated. A new heating system was added to the Mark II and ducted to the rear compartment.

Powering the Mark II was the DOHC aluminum six-cylinder, in 2.4-liter, 3.4-liter and 3.8-liter displacement from the Mark I. The fast and capable Mark II had a top speed of 125 mph and had an estimated 210 horsepower. The saloon came with a 120 bhp, 210 bhp or 220 bhp Jaguar XK engine. The 3.8 engine is very similar to the unit used in the 3.8 E-Type and shared the same block, crank, connecting rods and pistons but had a different inlet manifold and carburetion, so it was 30 bhp less. Compared to the straight ports of the E-Type configuration the head of the six-cylinder engine in the Mark II had curved ports. The 3.4- and 3.8-liter models were fitted with twin SU HD6 carburetors while the 2.4 was fitted with twin Solex carburetors.

The transmission was typically a four-speed with overdrive though some Borg-Warner automatics were purchased, usually in the U.S. The Mark II featured independent suspension all around, and most of the models were constructed with wire wheels. Four-wheel disc brakes were standard and the 3.8-liter was supplied fitted with a limited-slip differential. The Mark II was more than 100 kg heavier than the 2.4 / 3.4 models.