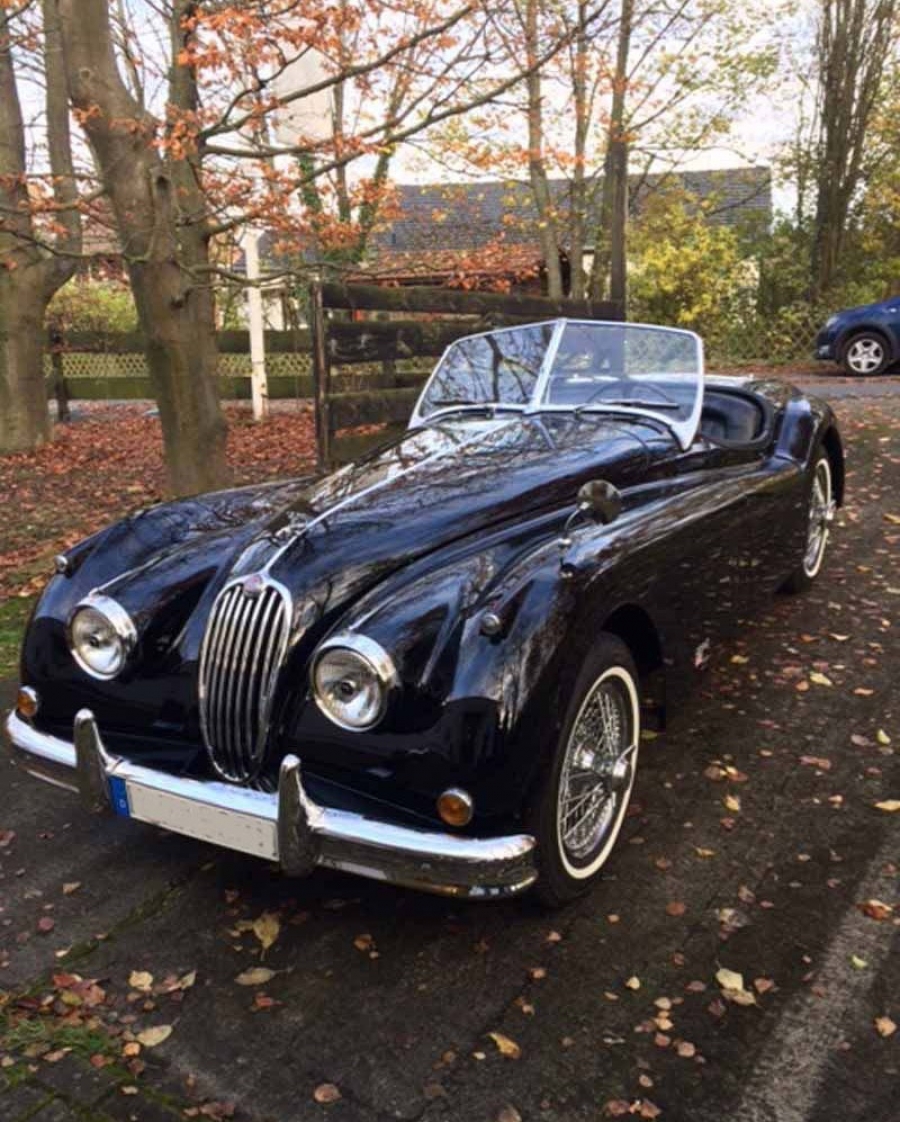 This XK 140 Roadster, it can be said, has been associated with Hannover for decades or known in Hanover  even if he was not often driven by the two Hanoverians who owned him since the early 1980s, and certainly not for racing - and rally inserts was used.

Darling of the family is probably the best term of this XK and that almost 40 years during.

As left-hand drive this car came in the late 1970s from the United States. Today, after the last major technical inspection, the car has a KM tachometer that still reads below 1000 km.

In the 80s, the car was restored from the ground up! The technology, the best running engine, well-functioning brakes but of course an external, new appearance, was important to the owner.
This task devoured a lot of money and more time and, we are talking about the 80s, actually much too expensive and too expensive.
Viewed at the time, it was a "madness restoration," but it should not hide the fact that today, especially in detail, it would be even better to get close to today's category 1.
You can see in some places, that the car was sometimes blue, that you left many parts old, because they were i.O. were. Also, the procurement of new products was many times more difficult than it is today.

The culmination of the then restoration was how the car looked from the outside!
Everything looked new and shone!
But the 80s were also so that you have not yet and in any case thought of originality in terms of paint. You did not necessarily take the color that the car had when it was born, but painted it to your own taste!
Here, according to the taste of the time, they chose a dark shade of brown, for which he received praise everywhere, for this brown was different and looked very noble.
Now the company UPS grew larger and bigger and their brown vans became more and more popular, so that the brown of the UPS car and the brown of the XK were very similar and the XK owner had to endure the jokes again and again UPS had bought large or Germany had become the boss of them.

In 1990, the XK owner decided to emigrate to Canada and was not able to take all the vehicles and collectibles with him, so that he could take some things. the XK 140 was on sale.

The charisma that this car had was so impressive that it quickly found a buyer who did not look for an XK, but actually spontaneously fell in love with the brown car and wanted to have it after a test drive, which you can do today say, the buyer, as well as the seller, very surprised.

It also happened to the new, second Hanoverian owner in the first driving season that he was being notified as a UPS driver and that he knew anyway that there had never been an XK 140 Roadster in such a brown.

Even in the automotive industry, he handed over the car to his best mechanics, who partially dismantled the car and prepared everything in black to repaint the XK.

The world was alright, the XK was admired by everyone again. Nice weather and not far away destinations were the requirements for some trips in the summer months.

Permanent service of workshops was important, the car was always operational although he was hardly driven and, as already written, was the pride of the couple.

The good start, always fresh, good tires, full power and full braking, in addition to cleaning and polishing were the permanent requirement although the car more or less only in a well-air-conditioned garage.

A striking curiosity should not be concealed here! Probably at the time of repainting, ie 1993/94, the bottom of the bonnet opener was removed lever and forgotten to reinstall. But instead of annoyed about it, the couple found this particularity good, because no one could open the hood, but the two knew the way to grab under the hood and open it as if by magic.
So they did it for over 20 years and today the Bowden train is even considered to have disappeared in the basement.