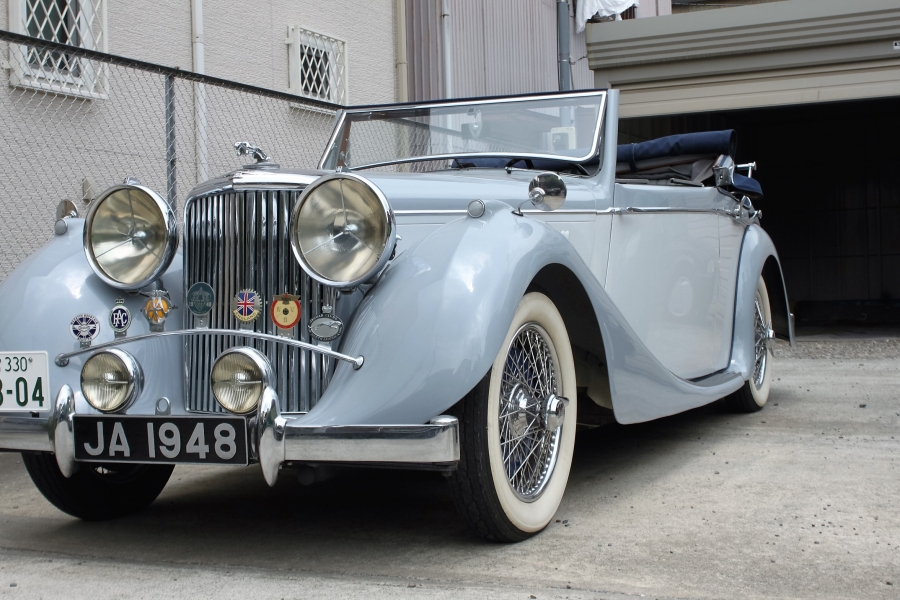 The Second World War changed many things, including the naming of Sir William Lyons' company and motorcars - it was self-evident that using the initials 'SS' in any form would now be unacceptable, and the standalone 'Jaguar' moniker was therefore adopted for both the business and its products.

The company's first post-war offerings were essentially the same models that had been available between 1936 and 1939 - a shapely four-door Saloon with the choice of 1.5, 2.5 or 3.5-litre Standard-derived powerplants, and an even more striking two-door Drophead Coupe powered by the same 2.5 or 3.5-litre units. The visual differences between the post-war Jaguar and the pre-war SS Jaguar models were very minor: the radiator badge now read 'Jaguar' and was accompanied by the engine size; the 'SS' badge that had lived in the centre of the rear bumper was replaced by a simple 'J'; the cars now rode on 18-inch wire wheels as standard but, for those that preferred the disc type, there was the option of Ace covers to fit over the wire centres; the spinners for the wire wheels also featured the new 'Jaguar' logo.

The post-war Jaguar Drophead Coupe was the epitome of a luxury British car in its day, with its bulbous free-standing chromed headlights, matching Lucas Teardrop fog lights, sporty road wheels and intricate three-position hood system. The interior was a sumptuous blend of fine grained wood, quality leather and matching carpets, while the standard equipment included a well-written and smartly-presented owner's manual, not to mention a notably comprehensive tray of well-engineered tools in the boot.

This line-up of cars remained largely unchanged until the 1948 Motor Show which, though forever associated with the launch of the sensational XK120 Sports Car, also saw the unveiling of the MKV range of Saloons and Drophead Coupes. Quite why they were entitled MKVs remains something of a puzzle, as hitherto Jaguar nomenclature had not embraced any Mark / MK differentiators. Only at this stage were the newcomer's immediate predecessors retrospectively christened MKIVs by Jaguar's rapidly growing band of enthusiasts. Of the 11,952 (1.5, 2.5 and 3.5-litre) MKIV cars reputedly made, a mere 376 were intended to be left-hand drive 3.5-litre Drophead Coupes (chassis numbers 637301 - 637376). Though, in practice many of them were converted to right-hand drive and renumbered accordingly before leaving the famous Browns Lane factory.

This gorgeous-looking left-hand drive MKIV 3.5 Litre Drophead Coupe - chassis number 637239 is equipped with four-speed manual transmission. It sports light blue and white  bodywork teamed with Grey leather upholstery and a Dark blue mohair-lined hood. The Jaguar was manufactured in June 1948 and delivered to James Baird, Seattle, Washington, USA. It was apparently treated to a body-off restoration in the USA between 1997 and 2000, during which the MK IV had a complete a body, interior trim and soft top color change(original color was Suede green). The MK IV came to Japan about 15 years ago. The engine was overhauled in Japan three years ago. The MKIV, is being sold complete with: one CD of the overhauling of the engine, plus all invoices; full original tool kit; Jaguar radiator mascot; original, fully-operating valve radio; hood cover. A delightful and rare car.

Only serious request will be considered. NO TRADE

Please only serious request will be considered.
Request with no name and location will not replied.
Thank you for your understanding.