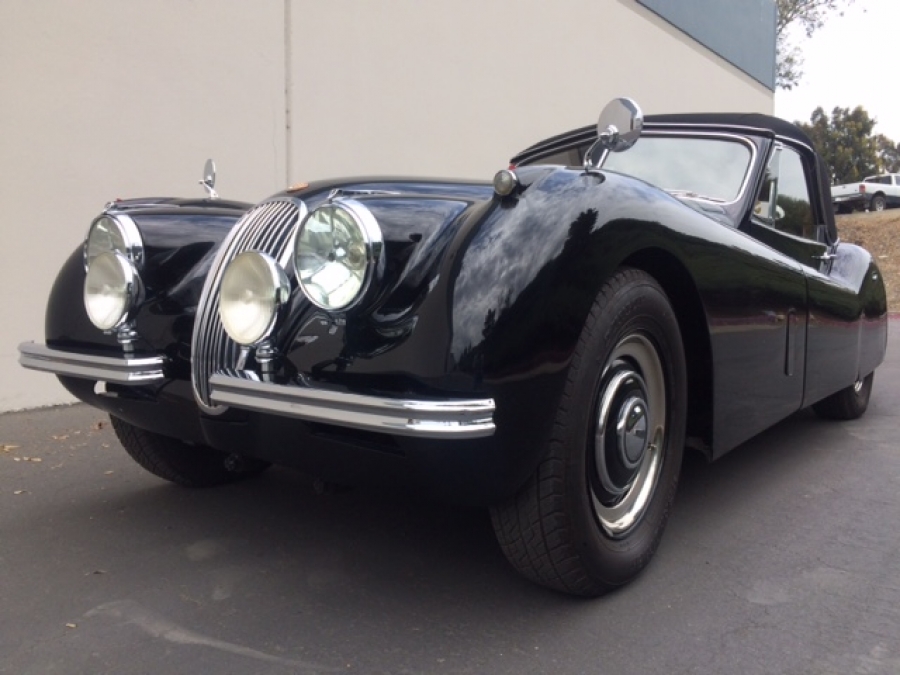 Absolutely stunning example of the 1954 Jaguar XK120 Drop Head Coupe. Beautiful black paint with stunningly finished red leather interior. The Wood dash is flawless. Rich flowing lines that only the Jaguar XK's offer. This car is in extraordinary condition. She looks like she just rolled out of the showroom yesterday. The car comes with the Heritage Certificate of Authenticity, verifying that the Chassis Engine Body Gearbox and Transmission are all numbers matching. The car came from a private owner who has owned a number of Jaguar XK's over the years, he is also a collector of 356's Porsches. She was maintained by Roger Worthington a man from northern Maryland who restored a different Jaguar XK120 to a 100 point car which placed second in the nation, this year they are confident that it will place first. The car was purchased from a Mercedes Benz parts guy from Frederick Md. The man was a Princeton Alum who only drove it a total of 500 miles to and from Princeton Alumni Events. Before that it was believed to be owned by a woman in Georgetown DC, and was likely sold new by Jack Pry the only Jaguar, Mercedes, and Aston Martin dealer in the area at the time. She has new Stainless Steel exhaust. Wonderful Tripod P100 Lucas Driving lights. Also an extremely rare find is the two pieces of original Jaguar fitted luggage in the trunk. The price is exceptionally fair for what this vehicle represents, a true piece of automotive history.

This is an older restoration of an exceptional car which comes with Jaguar Heritage Trust production record certificate # 45943.

It was manufactured 16 September, 1953  and is shown in the original factory black exterior paint color, red interior trim and black soft top.   As evidenced by the Trust certificate, chassis, engine, body, and transmission are original and all matching to the car.
It was imported to the U.S.A. by Hoffman in New York.   The selling dealer is believed to have been Jack Pry, Ltd. in Washington, D.C.  The first owner is reported to have been a lady in Georgetown, D.C. who kept the car for many years.  It was later acquired by a gentleman from Maryland, who while he, too, was a longtime owner, only drove the car once a year in the class parade at his Princeton University reunions.